Rangwali Pichhaura (रंग्वाली पिछौड़ा) is a garment worn at ceremonial occasions in Uttarakhand. From bride to great grandmother, every women in the family wear it on occasions be it namkarna or marriage, upanayan or mundon. It has a special significance and mandatory for all married women in the family or close relation. Another salient feature of Rangwali Pichhora is that it can be put on by widows also, those as per social traditions, they are not supposed to wear colourful garments.

In the center, a ‘Swastik’ is drawn and in four quadrant of swastik, Sun, Shankh (Cronch shell), A Bell with ‘Om’ and Goddess are drawn. The swastik is made by drawing some geometrical drawings or leaves and flowers and then surrounded by small dots. Then dots of larger size are printed all over. This printing is surrounded by a beautiful border. After border, lace and kinari or jhalar is stitched to make is more colourful, attractive and lively.

Theses sketches drawn in the pichhora has religious significance also. The Swastik represents al the gods and goddesses. It is drawn in some form or the other at all the religious rituals. It denotes the ‘karmyoga’. Its four arms pointing forward inspire to move ahead. The center of swastik is ‘Om’ which has great importance in meditation and spirituality.
The first quadrant of swastik houses Sun, the god with great power. Sun is worshiped for well being of sons. Second quadrant houses Goddess for prosperity and well being of all nears and dears, third quadrant has a ‘Shankha’ (Cronch shell) which is blown during worship and all the ill omen are understood to fear this sound and not dare to harm anyone around. The last quadrant has a Bell which is also used in worship.

In olden days, it was made at home. A few meters of white cloth was washed and dyed first in yellow colour and then dots were printed with the help of a coin wrapped in cloth. Common colours available in market were used for it earlier but now Rapid colours are being used. The homemade pichhora were printed with ordinary colours, which used to spread on getting moist. The process of drawing / printing by hand was very tiresome and sometime the results were also not so good. 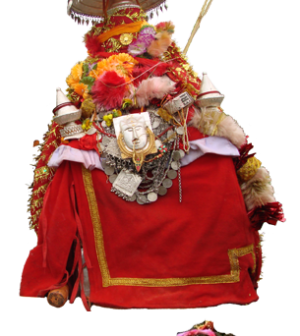 This Raj jat yatra originates from the nauti village 25 km from karnprayag,in karnpryag tahsil of Indian state of Uttarakhand. The Kunwar of village Kansua inaugurates the ceremony. The legend is this that Nanda Devi, consort of Lord Shiva left her village and went to the nanda devi parbat. Therefore when the yatra starts, heavy rain occurs as if the devi is crying. This yatra covers many villages and in between the Devi meets her sister in the Bhagwati village.

This yatra is very tough on account the landscape it goes through. In between the yatra there comes a Lake Roopkund where lies the hundreds of skeletons. It is said that once the King took some dancers to this sacred place due to which heavy snow fell and people died and the dancers got transformed into stone which can be sen in Patarnachonia. The other myth is this that king Yasodhwal’s wife was pregnant and while she was giving birth to her child, her placenta flowed down to Roopkund and this in turn caused the death of the people on that place. That is why the river Nandakini lost her significance and the Nandprayag is not considered sacred as the other Panch Prayags like Devprayag and Rudraprayag. 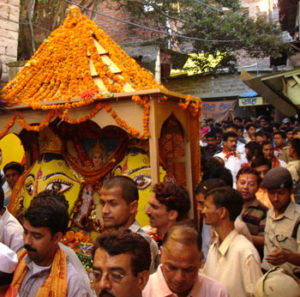 The best known fair of this region, held in the month of September at Almora town, is organized since the Chand kings ruled this place. It is believed that ‘Nanda’ used to be the family Goddess of Chanda dynasty. The word meaning of the word ‘Nanda’ is prosperity. The temple of ‘Nanda’ in Almora was built by Dyot Chanda in seventeenth century, the then ruler of this place. Presently this temple remains the core of the festival. The duration of the festival is five days and approximately twenty five thousand people tourist come to attend this festival.

Jageshwer Monsoon Festival is organized from 15 July to 15 August. lying in the beautiful Jataganaga valley, housing one of the 12 jyotirlingas of India is a complex of 12 temples in all. Two large fairs are held at jageshwar, one at the occasion of Shivratri and the other in the north of Shrawan (July-Aug). A dip in the Jat Ganga and in the Brahmakund near the temple complex is of great religious significance on the occasion

The famous festival of Hindus, Dushara, in October, commemorates the victory of Lord Rama over Ravana, the monstrous ten-headed king of Lanka or Ceylon, as described in Ramayana, is celebrated in a very unique way in Almora town. Approximately five to six thousand tourists from the outskirts come to attend the festival in Almora town. Showing the symbolic victory of the truth the effigies of devils are prepared in a very artistic manner in almost all the ‘Mohallas’ (wards) of the town. Finally in a social gathering all these effigies are burnt. The festival is generally celebrated in the month of October.

52 km away from Ranikhet, Doonagiri is a pilgrim spot noted for its ancient Durga temple. This temple attracts a great number of pilgrims during the fari days at Navratri.

Situated in the wide valley of Ram Ganga (West), Dwarahat is 38 Km from Ranikhet and has a cluster of old temples. A huge fair is organized every year on Baisakhi Day.

Situated at an elevation of 2116 m above sea level, Gananath is 47 Km form Almora and is know for its natural landscape. A fair is held here every year on Kartik Purnima (Oct/Nov.), when thousands of pilgrims come to worship Lord Shiva and Ganesh. Childless couples also come here in large numbers to evoke blessings for the gift of a child.

This fair on Vishuwat Sankranti day is held in the Shiva temple at Masi, Almora. It is famous fair of Pali Pachhaun. Brisk business is done during the fair and animals, specially bullocks and calves are sold. The villagers bearing tumra come with jaal, fatyav and hathiya to the river to catch fish. The fish festival is locally known as ‘Dahau’.